The concept of Meals on Wheels originated in Great Britain following the Blitz in 1939 when the Women’s Volunteer Service for Civil Defense began serving food to the ill and elderly who were unable to care for themselves.

An early form of Meals on Wheels originated in Indianapolis in the 1960s as a Little Red Door Cancer Agency program, serving meals by truck, only to cancer patients. This project had to be discontinued due to a lack of clients and the expense involved in delivery. 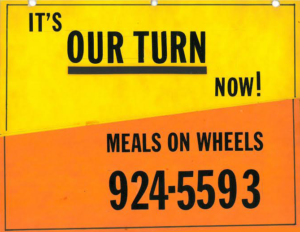 Early pre-logo Meals on Wheels sign with original (since discontinued) phone number from the seventies.

The National Council of Jewish Women, as a National project, sponsored a “home-delivered” food program with the Indianapolis Section doing the pilot study. This pilot study was executed and directed by volunteers. The food was prepared by the Borinstein Home for the Aged, but with the completion of Hooverwood, many of the clients moved into this new and modern nursing center. At that time, it was not planned to discontinue the program but only postpone it until there was a greater need and demand.

“The Meals on Wheels program began in 1968 as a special project of the National Council of Jewish Women to provide kosher meals to persons unable to shop and prepare their own meals.” Here in Indianapolis “it became a city-wide project in 1971 receiving its funding from the Commission on Aged and Aging and a grant from Lilly Endowment.” – The Jewish Post and Opinion. Friday, December 28, 1973.

On March 4, 1971, Meals on Wheels starts with six clients and ten volunteers and worked out of University Heights Hospital. With the success, experience and leadership of the National Council of Jewish Women, Technical and Managerial Services (TAMS) assisted in co-sponsoring a new city-wide program, now known as Meals on Wheels, Inc. A number of members of the TAMS Board of Directors became actively involved on the board of Meals on Wheels and made important contributions to the early growth of the program. 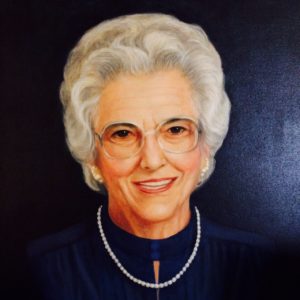 Portrait of Mrs. Marge L. Jacobs which resides at The Sol Center.

Mrs. Marge L. Jacobs served as the first president of the board of directors and chair of the Meals on Wheels program. She was the honorary chair until her death in 1997.

© 2022 Meals on Wheels of Central Indiana | All rights reserved.